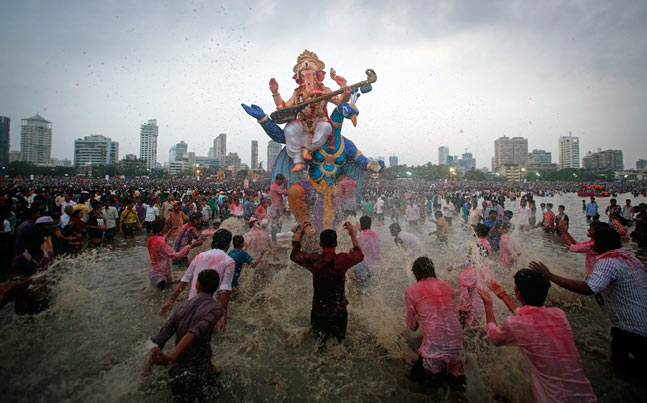 The Mindless God is today’s humanity and it’s meaning to devotion. It is the reversing of intellect to De-evolution. If reason is suspended, the end is near. And in all of this, how sad for it’s Creator, the God himself.

Think about it critically for a minute. If the premise of all God is basic Goodness, then how and when did Goodness escape true devotion? Man is absolutely indifferent to the anguish caused to birds, bees, plants, trees, dogs on the streets and other humans. Crackers, noise, blocking roads, utter chaos and disregard for the sick or elderly, children who study, publicly parading your God idol because, “that’s how it’s always been done as tradition”, and yet none of these practices are questioned? Try posting a status over a critical reality you observe rather than sticking to the usual exchange of pleasantries over Ganesh Chaturthi and other festivals. It will help make the world a better place. Because in all His basic Goodness, God wouldn’t approve of any of this, I presume. Of causing distress to others. It’s a fundamental flaw and discrepancy with His philosophy coming from any text and you don’t need to be a learned theologist to reason out with basics.

Let’s recognize, none of this is truly for God to begin with, this is for the Self and to satisfy one’s own idea of God. It is all about the human Ego. And that is exactly what religion is too, by the way. Let’s remember God did not create this religion. Man did and he has only used and continues to use it for his own purpose with utter arrogance & disregard. Everything in today’s religion that is dogmatically practiced is a demand man wants and will have no matter what, but however can truly do better without. Even without religion itself in my personal opinion that is open to disagreement.

However, in observable reality God is no more private and sacred in any of these practices, nor knows Goodness anymore because his people have brought him down. Around 90% offices shut in Mumbai for Ganpati Visarjan is enough evidence to all the inconvenience, chaos and distress brought with religion. And God can’t be blamed for this, but man does escape it very conveniently.

No, I don’t have a problem with a holiday for employees. I do have a reasonable problem with religion becoming a reason for a national holiday of sorts, where everything meaningless is turned to a silent retreat. And if you think of it, that essentially becomes the devaluing of your own God itself who created the highest thinking species according the books. Ever thought about this disservice to your God with suspension of your reason?

Next, since the idea of God is ‘sacred’, one can deduce by logic that his devotion should be enough with one’s personal meaning and could be more private, not distressing to anyone else and certainly not needing meaningless parading on the streets in the name of revelry. What with all the pollution you create in His waters killing His other creations?

Under all these conditions however, God must be crying and heartbroken at the ignorant state of affairs his people have reached. He has been devalued and brought down by his own Believers with mindless adoration that celebrates religion as an absolute entity. Whoever thought religion is an unquestionable, non-defiable entity? All written texts are infact full of inquiries. That’s what produced lessons from them. If your instinct can raise a question, trust your instinct better than someone who tells you what to believe blindly. You will find out for yourself well enough with inquiry. If you’re searching for God in idols, know that your God is in your very instinct that may be feeling disturbed seeing things around. Be more present to YOURSELF. You will do good service to your God. This is called reasoning, not a sermon. What you are told to practice blindly which you follow if you do, is infact a preachy sermon.

If there is a God, he is YOU. You are his voice and extension and He must be in everything if he is omnipresent, including the birds you scare and the people you bring to distress. And if his creations are distressed, how can He be pleased with mindless reverence? He doesn’t need a golden throne or a crown for 10 days. This is the dichotomy of what religion today is and it deserves to be questioned to stop this increasing De-evolution. If your inner voice feels disturbed, so is your ‘God’ if you Believe. If man is unhappy, so will his God be. Man needs to recognize this for the majority of Believers who will fold hands in prayer.

Please save your God. Please raise an objection to meaningless ritualism without expecting someone else to make the start. Please educate more people to think critically for the sake of that God you believe in and teach your children to think and choose better. Please allow them to question practices that appear meaningless to them.  A mind that comes without pre-conceived ideas such as a child’s, is far more open to learning and is probably existence in its purest form. Part of why kids are better learners than adults who think they already know something. Trouble is thinking that you know, we love to arrogate ourselves with.

And no, you don’t have to be an agnostic like me to question mindless religion or be an atheist like someone else. You can be a moderate religionist choosing some more reason before you bring your next Ganesh home. This Earth is yours and your precious God’s. Think.